There are over 37,000 species of spiders on earth; thankfully, most of them live in Colorado. The spiders we do deal with are mostly beneficial, feeding on bothersome insects while keeping to themselves. Most spiders are capable of biting humans, and while their bites may be painful, most do not require medical attention. The best way to keep yourself and your loved ones safe is to be educated on the spiders in Colrado.

Types of Spiders in Colorado

In Colorado, we have a variety of spiders of all shapes and sizes. Not all of them are native to Colorado, as many of them have been carried into the state as people move. Common spiders in Colorado that you may encounter include:

Are There Deadly Spiders in Colorado?

While some spiders might have scary names or notorious reputations, none of the spiders in Denver, or the rest of Colorado are deadly. Despite rumors that spiders like the black widow or brown recluse have deadly bites, there are no confirmed deaths from them. You’re more likely to develop painful lesions and potentially serious health problems at worst.

Do Venomous Spiders Live in Colorado?

When a spider is venomous, they use their fangs to inject venom into whatever they bite, which can be humans, insects, or even other spiders. Luckily for us, most spiders’ fangs aren’t long enough to break your skin. The most venomous spiders to humans in Colorado, meaning spiders that can impact your health, include:

Hobo spiders get their name from their habit of hitching rides with humans along highways, traveling far outside their original niche. It has established itself in at least six states, displacing native spiders as its numbers increase.

Hobo spiders bite in self-defense, causing headaches, blisters, and slow-healing lesions, although approximately half of those bitten showed no symptoms. While it was at one point also considered to cause necrosis, this effect has become debated due to lack of information. 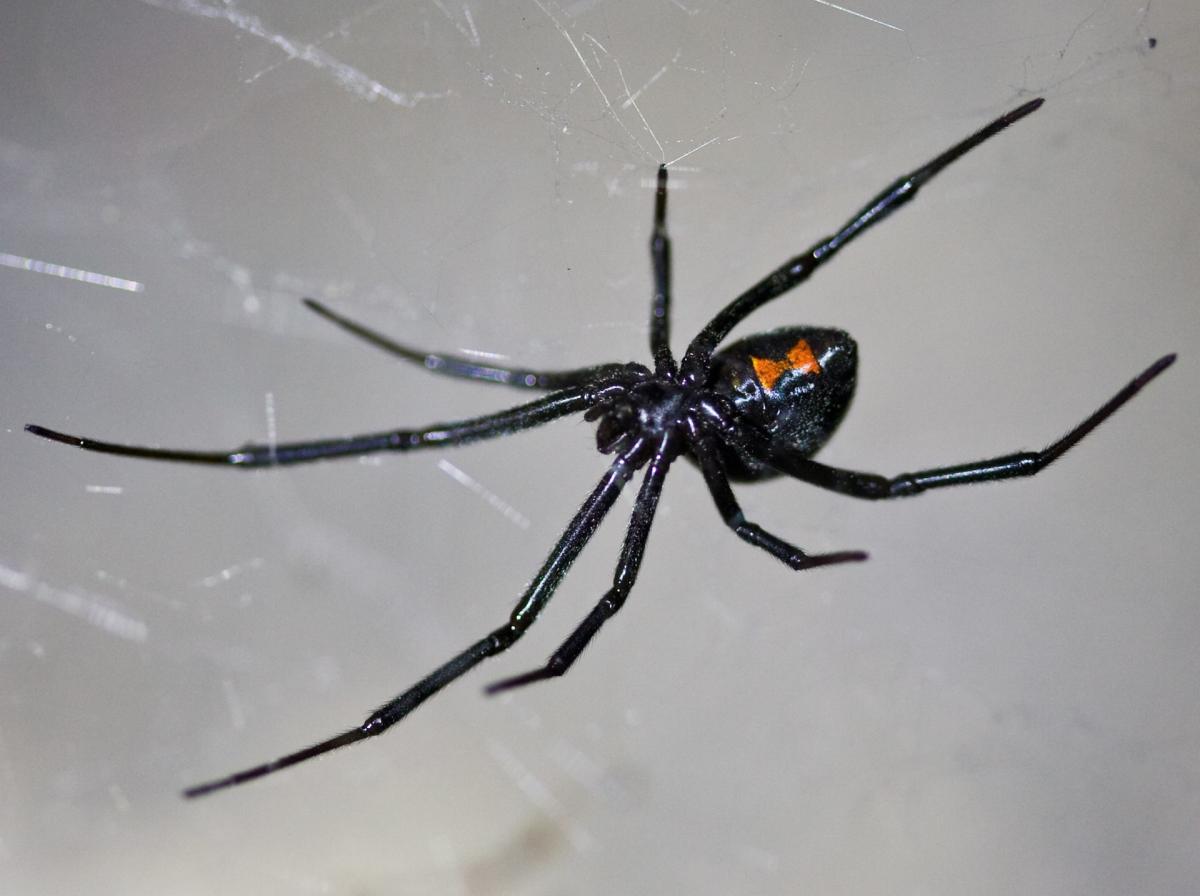 Female black widows are distinct spiders, known for their black bodies with a red hourglass on the underside of their abdomen. They usually make their homes in dark, dry shelters like garages, basements, rodent holes, and dense vegetation.

Black widow bites are extremely painful, and they are considered to be the most venomous spider in North America. While they are extremely poisonous, they only bite humans when they are disturbed. The effects of being bitten include muscle aches, nausea, and paralysis of the diaphragm.

Yellow sac spiders create a flat silk sac rather than a web, located in shielded a spot such as where a wall and ceiling meet. They’re nocturnal spiders, actively hunting their prey and moving around during the night.

These spiders are slightly more aggressive than most house spiders, biting humans multiple times when threatened. Yellow sac spiders’ bites result in moderate pain, itching, and localized swelling, in addition to a lesion that heals over the course of a few weeks. 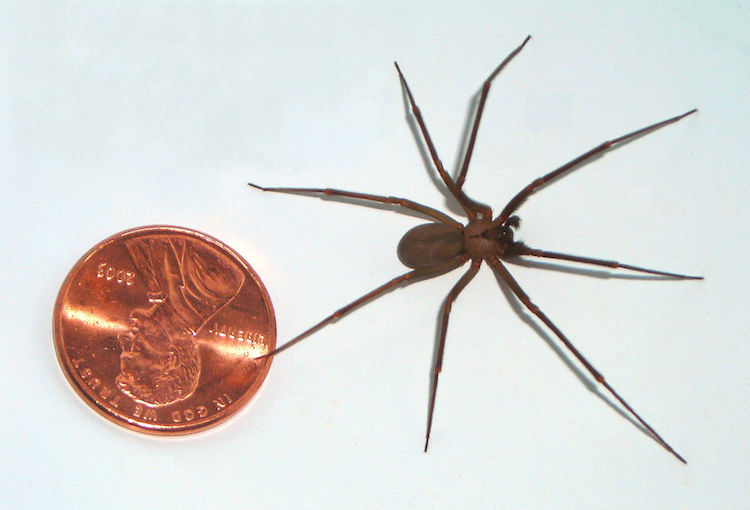 Brown recluse spiders are identified through the violin markings on its back, which is how it got the nickname of the “fiddleback spider.” They like dark corners that are tucked away from activity and are relatively shy and non-aggressive.

Equipped with a powerful venom, these spiders have become infamous. They aren’t as bad as you would believe, however. Brown recluse spider bites do not kill people but can result in necrotic lesions, although most of the time they simply leave behind a pimple-like welt.

What Safe, or Non-Venomous, Spiders are in Colorado?

Most spiders steer clear of humans whenever possible, due mostly to the drastic size difference. Spiders perceive us as a threat to be avoided rather than fought, which is why most species will only bite if threatened or if you get too close to their eggs. Even if you are bitten by a spider, most aren’t capable of injecting enough venom to cause any serious effects, if any at all.

Most spiders you find in your home or backyard are relatively harmless, except for the four previously mentioned venomous spiders. Some harmless spiders include:

What’s the Biggest Spider in Colorado? 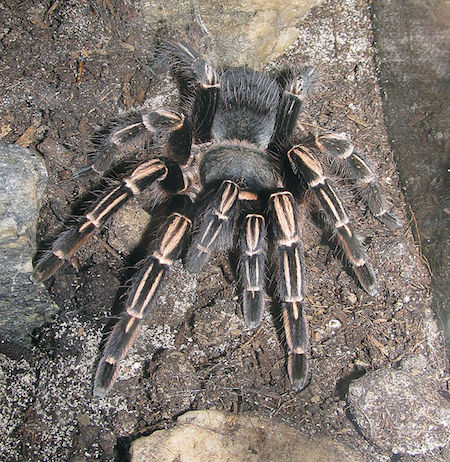 The largest spider in Colorado is the tarantula. When you think of tarantulas, you probably picture them in rainforests and jungles far away, but they’re also found right here in Denver! In the summer, thousands of male spiders migrate from Oklahoma to Colorado, looking to mate with the females that hide in the grasslands.

Tarantulas are hairy spiders that range from a gray-brown to black with bands of colors on their legs. The hairs on their abdomen are usually longer and lighter and serve as their primary defense mechanism. When threatened, tarantulas will shoot a mist of barbed hairs at their attacker

Rather than use webs to catch their prey, these spiders hunt at night, waiting at the edge of their burrow for an insect to pass by. When one does, the tarantula rushes forward, grabbing it and bringing the insect inside the burrow. Such burrows can be over a foot deep and reinforced with a mixture of silk and dried leaves.

Tarantulas are also fairly docile and rarely bite people. When they do, their bite is painful but not a major health risk. Symptoms include localized pain, swelling, and joint stiffness.

What Spiders Jump in Colorado?

Spiders have an amazing ability to crawl on walls, ceilings, windows, and almost any other surface. They use tiny hairs on their legs to grip onto surfaces and seemingly defy gravity, but that’s not their only mode of transportation.

In addition to crawling, some species of spiders also jump, sailing through the air to reach their prey. The most common species of jumping spiders in Denver are the bold jumper, Apache jumping spider, and zebra spider.

Despite what you may think, jumping spiders don’t have specialized leg muscles. Instead, they change their blood flow, contracting certain muscles to increase the amount of blood going to their legs. This allows their legs to fully extend, sending them flying as far as 50 times their body length.

Most jumping spiders are shy, hiding and running away when humans get too close. Their venom, while paralyzing to insects, is not dangerous to people because jumping spiders can’t deliver a large enough dose.

Just because spiders are beneficial to the environment and useful bug catchers doesn’t mean you want them in your home. If your spider problem is a small one, there are several DIY treatments that will have you seeing results, such as:

If you’re dealing with more than a spider here and there, or dangerous spiders like black widows or brown recluses, then you may need to consider professional help. Here at Triangle Pest Control, we can help with our Denver pest control services. Our professional exterminators will perform a thorough inspection of your home to locate areas affected by spiders. From there, they’ll treat every crack and crevice where spiders attempt to hide, as well as the exterior to create a barrier that keeps spiders and other pests far away. We’ll also work with you to address any questions or concerns, keeping you informed and giving you back peace of mind.

I would certainly recommend your company.....I would rate the service I received a 10!