Fleas can be hard to spot, and they reproduce rapidly. A single female can produce more than 2,000 eggs in the span of 50 days! Pets can bring fleas into your home, resulting in a high degree of discomfort and potential danger to animal and human hosts. Not only are their bites uncomfortable, but fleas can spread disease, including the deadly bubonic plague. 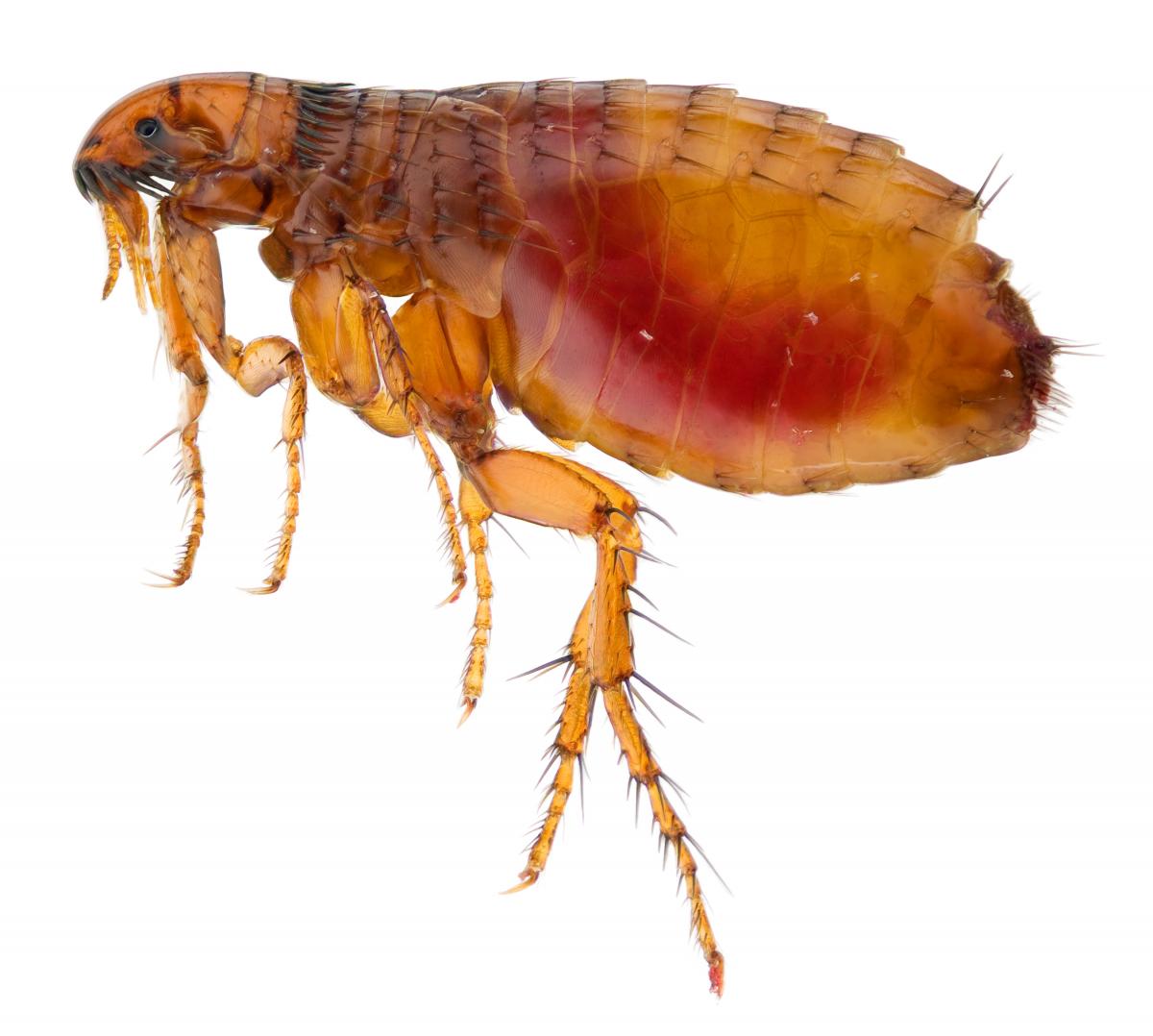 Fleas are dark, reddish-brown insects that grow up to 1/6” which is about the size of a sesame seed. Their bodies are flat and consist of a head, thorax, abdomen, six legs, two eyes, and two short antennae. The flea’s body is covered with hard protective scales called sclerites and tiny hairs that help them attach to their host. The mouth of a flea consists of three mouthparts — two laciniae, an epipharynx, and the labium — used to pierce the host’s skin and suck its blood. The flea’s back legs are longer than the front, which enables them to run quickly and jump up to 13 inches horizontally and 7 inches vertically!

The flea’s life cycle has four stages: egg, larva, pupa, and adult. A couple of days after mating, the female adult lays 40-50 eggs on the body of her host. Because the eggs have nothing to adhere them to the host, they typically fall off and continue their development where they land. Within a week, the eggs hatch into larvae and, after another week, the larvae spin cocoons to become pupae. After another couple of weeks, the pupae develop into adults. Each stage of the cycle can move more slowly or quickly depending on environmental conditions. This flexible life cycle can take as little as two weeks and as long as two years for a flea to become an adult.

New adult fleas must have a blood meal within a week or they die. Generally, a flea usually lives between two and three months. However, fleas are capable of surviving a few months between meals if they don’t expend energy. A female flea can lay 2,000 eggs over the course of her short lifetime, quickly causing a serious infestation on their host and the areas it frequents.

What are the unique characteristics of fleas?

Fleas feed exclusively on blood. They are commonly found on dogs and cats but will attack other animals, including humans, as the opportunity arises. Fleas can spread quickly but generally do not move directly from host to host. Instead, as they develop in the host’s environment, new fleas seek out targets. When a flea finds a host, it can remain there for a couple of months, feeding repeatedly for over two hours at a time. Female fleas, which tend to be larger than males, can ingest up to fifteen times their body weight in blood.

What are the habits of fleas?

Fleas require blood to survive, so they seek out hosts that can provide sustenance. Fleas thrive in moist air, multiplying faster in high humidity. These parasites are attracted to heat, carbon dioxide, and movement to seek out their hosts.

Where are fleas commonly found?

Fleas prefer low altitudes that are warm and humid but will live anywhere they can find a suitable host. In the United States, fleas are most abundant in the Southeast and West Coast. They are least active in the dryer, colder states in the North, Midwest, and West.

Fleas are most commonly found on mammals, though they will also live on birds. In homes, fleas burrow into carpeting, furniture, pet beds, clothing, or any other location they can develop undisturbed.

What are the risks of having fleas?

When fleas bite, they inject saliva which causes irritation and itchy red bumps. When hosts scratch, it aggravates the area even more and can result in a secondary skin infection and hair loss. Fleas are also known to transmit other harmful parasites and bacteria that can result in tapeworm, cat scratch disease, or flea allergy dermatitis. Fleas have also been known to cause anemia and carry bubonic plague. Left untreated, the conditions can become serious or even fatal.

Dealing with a flea problem?

Speak with an expert technician today.