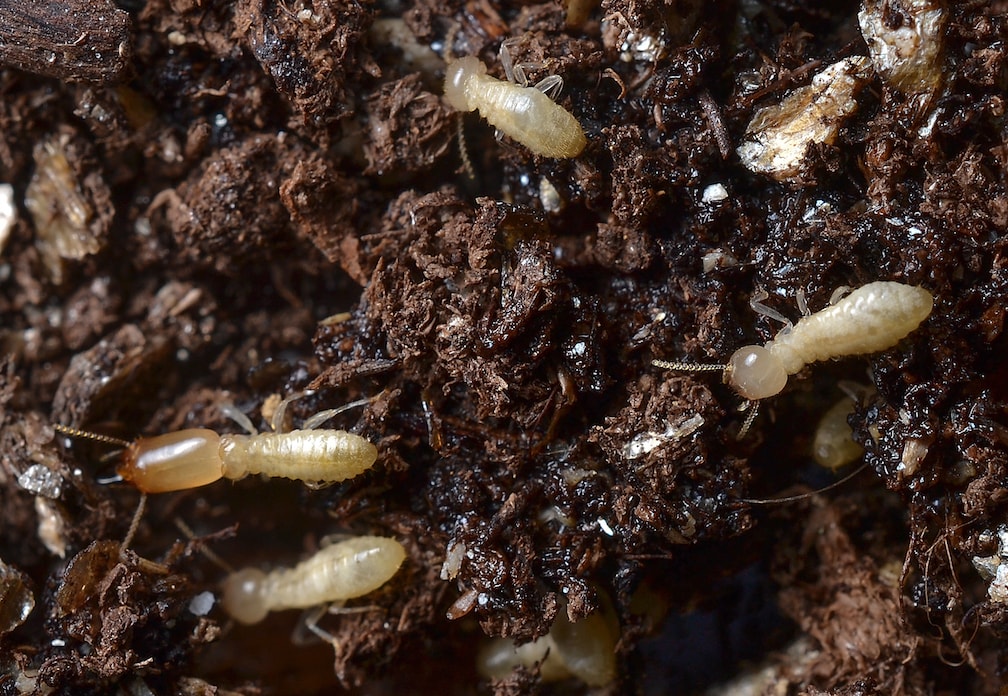 Subterranean termites live in underground colonies or in moist secluded areas above ground that can contain up to 2 million members. They build distinctive "mud tubes" to gain access to food sources and to protect themselves from open air. With proper termite control, you can avoid termites finding their way into your home. Termite colonies are organized into castes depending on tasks -- workers, soldiers, and reproductives.

Pest Identification:
Size
1/8 - 3/8 in. (workers and soldiers); 1 in. (swarmers)
Color
Workers are a pale white hue; soldiers have a similarly-colored body but with a brown head; swarmers often are dark brown or black with white/clear wings.
Body Structure
Workers and soldiers feature an elongated oval body with six legs and antennae. The soldier is characterized by a larger, brown head with prominent mandibles. Swarmers, also known as “primary reproductives,” feature similar bodies as workers only with wings. Unlike ants, they do not have segmented bodies.
Characteristics
Subterranean termites are organized by a caste system with workers, soldiers, primary reproductives/swarmers, secondary reproductives, and finally kings and queens. Termites begin the life cycle by swarming. After winged males and females mate, they shed their wings and begin a new colony, becoming the “king” and “queen.” As king and queen, they are the sole reproducers. After the queen’s eggs hatch, the offspring assume the various roles of the caste. Primary reproductives eventually leave the colony to swarm, mate and form new colonies. Wingless secondary reproductives, however, never leave the colony and are present to support the queen. Workers are sexually underdeveloped and do not mate; instead, they are in charge of building tunnels as well as feeding other castes. Soldiers handle defense of the colony, using their large mouthparts to fight off predators. Queens may live up to 50 years under ideal conditions and produce tens of thousands of eggs in her lifetime. Workers and soldiers, on the other hand, live about 1-2 years.
Habitat & Behavior
Dependent upon moisture for survival, subterranean termites are social insects residing in underground colonies containing as many as 1 million members. The colonies feature an intricate series of tunnels leading to food sources. Termites reach above-ground food sources by constructing mud tubes. The mud tubes shelter subterranean termites from the elements, allowing them to transport food in a moist environment. A tell-tale sign of termite infestation is mud tubes running along a foundation or along beams in a basement area of a home. Likewise, termites swarming around your home also is an obvious sign that termites are lurking nearby. Termites feed primarily on detritus; however, they consume all types of cellulose, including wood and structural timbers.
Commonly Active
Spring / Summer / Fall
Prevention & Treatment
If mud tubes are noted around a foundation or swarmers are spotted near your home, contact a pest control professional immediately. A trained professional will be equipped to locate the colony and tunnels and then administer proper treatment. Find out more about subterranean termite treatment and prevention options.