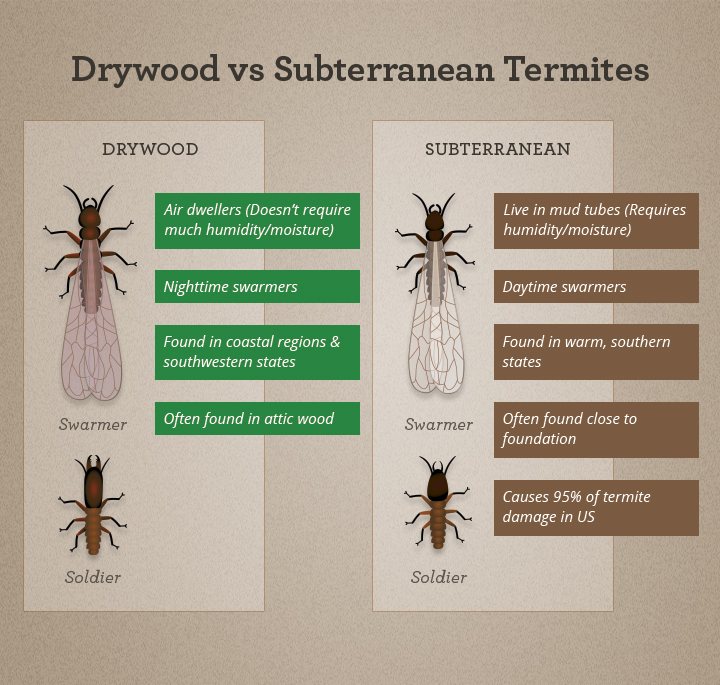 Do you hear that buzzing sound? Springtime means a return of many of the insects that were all but forgotten during the winter months. For many homeowners in the south, especially in North Carolina, one type of insect is a particularly unwelcome sight. When termites start to swarm in April and May, North Carolina homeowners know that it is time to protect their homes from these destructive invaders.

Read on to find out all you need to know about termites, so you can be armed with the knowledge you need to protect your family’s home.

You might also notice black wingless termites which aren't uncommon, but are another type of termite to be on the lookout for in your home!

Drywood termites are identified by the fact that they nest in the very wood that they are infesting, instead of in the ground. These insects can arrive from the air and infest structures without leaving any evidence like mud tubes behind, and without requiring ground contact with a surface. In general, drywood termites swarm in the evening, and require far less moisture than their subterranean counterparts.

The purpose of swarming is for termites to reproduce and create new colonies near food sources. Like ants, termites are very social creatures that thrive in a colony. Young termites develop wings in the springtime in order to disperse from their parent colonies in swarms. These “swarmers,” or “alates” fly through mud tubes in the case of subterranean termites, or through the air in cases of drywood termites. Though they don’t fly for long, the swarms are usually carried along on a breeze until they reach the ground. Once they touch back down, the insects can establish new colonies. Colonies usually swarm only once per year, though in some cases, multiple swarms may occur. When multiple swarms occur in a season, they are generally smaller swarms than the first occurrence.

When Do Termites Come Out?

Termites are most active during the swarming season which normally occurs from August to November as well as Early Spring. This is when termites are leaving their colonies in an attempt to expand and form new colonies.

How to Identify a Termite Swarm

Termite infestations happen in the blink of an eye, so it is important to be able to identify termite swarms quickly and correctly. The swarming stage is when many termites are ready to establish a new colony and reproduce to fill that colony.

In many ways, termite swarmers resemble flying ants, and they don’t come alone! Termite colonies begin forming immediately after swarmers hit the ground in a suitable spot, and termites are good at making homes just about anywhere that has a cellulose source and a healthy amount of moisture--exactly the kind of environment that your house provides!

Here’s how to tell the difference between termite swarmers and flying ants:

Another way to identify if you have a termite swarm is to look around the entry site, usually a door or window sill, for discarded wings. Swarming termites have temporary wings that fall off soon after landing. If you see discarded wings where you see the swarm, chances are it’s not  flying ants!

So What Does This Mean for My Home?

If you’ve identified that you have a termite infestation on your hands, it’s important to act quickly. Termite swarmers begin to establish a new colony immediately after landing in a suitable location, and infestations can occur before you know it.

The first thing to do is identify what type of termite you have in your home. One of the easiest ways to do this is to evaluate the damage that the termites have done to your home.

I Found Signs of a Termite Infestation, What Now?

If you’ve inspected your home and you’ve found signs of infestation, don’t panic! To stop the insects from causing further damage to your home, identify the specific infestation sites. That’s right, it’s time to go termite hunting. Take a flashlight and a probing device, like a screwdriver, and start inspecting your surfaces. Tap on wood and listen for hollow sounds, look for holes in wooden surfaces and look for mud tubes or adult insects to determine where they are hiding out in your house. Once you have determined where the termites are living, it is much easier to determine their entry point, and determine what kind of termites you are dealing with.

How to Prevent Termite Damage

Termites cause thousands of dollars in damage in individual homes in the United States every year, affecting more than 600,000 homes. This results in an estimated $5 billion in damage annually. You want to ensure that your home isn’t one of them!

How to Treat Termite Infestations

If you’ve already got termites making a meal out of your home, there are options available for evicting them quickly. To ensure that your home isn’t contributing to that $5 billion total, utilize one of these termite treatments to beat the bugs.

Having termites is a stressful event, but it isn’t one that you have to deal with alone. For a top pest control company in Charlotte or elsewhere in NC, make sure you Contact Triangle Pest Control for more information, and let them take care of the wood-destroying insects before they become a real issue.

Think your home might be the victim of a termite infestation?

Get A Free Termite Inspection!

The bed bug treatment has been effective and I've never had any issues with the service.